Himanta Biswa Sarma has been caught for spreading a “False” video on social media.

Himanta Biswa Sarma on Friday posted a video on Facebook and Twitter claiming ‘Pakistan zindabad’ slogans were raised by AIUDF supporters on the arrival of party chief Badruddin Ajmal at Silchar Airport.

Himanta Biswa Sarma,  had tweeted: “Look at the brazenness of these fundamentalists anti-national people who are shouting PAKISTAN ZINDABAD while they welcome MP @BadruddinAjmal. This thoroughly exposes @INCIndia which is encouraging such forces by forging an alliance. We shall fight them tooth & nail.”

Facebook on Saturday marked the video posted by Himanta Biswa Sarma’s as “False Information”, and said the video was checked by independent fact-checkers, and found it “False”.

Debabrata Saikia, and Congress MP Gaurav Gogoi had demanded that if anyone was actually raised “Pakistan Zindabad” slogan at Silchar airport, they should be arrested immediately.

The AIUDF described the video as “cheap politics” by the BJP. The party claimed Himanta Biswa Sarma distorted the slogan ‘Aziz Khan Zindabad’ into ‘Pakistan Zindabad’.

Aziz Ahmed Khan is an MLA of AIUDF, and represents the Karimganj South Assembly constituency.

Even after being caught on the wrong foot by Facebook and Alt News, Himanta Biswa Sarma is yet to admit that the video which he had uploaded was “False”.

Assam Finance and Health Minister Himanta Biswa Sarma on Friday said pro-Pakistan sloganeering carried out at the state's Silchar airport would be probed. Police officials in Guwahati and Silchar later confirmed that they were investigating the matter.

Talking to the media, the Minister said that the same set of people earlier also had indulged in similar acts in Assam and had resumed their campaign on religious lines in view of the Assembly elections next year.

Himanta Biswa Sarma says "I have asked the police to take actions against all those who raised slogans in favour of Pakistan. Law will take its own course," Sarma said in Guwahati.

The All India United Democratic Front (AIUDF), which found itself at the centre of the controversy, denied the charge that its supporters shouted such slogans and dubbed it a "cheap tactics of the BJP".

The AIUDF also tweeted: "... on the cheap politics by BJP; how they, along with a section of the media distorted the slogan 'Aziz Khan zindabad' into 'Pakistan zindabad'."

According to the Congress leader, Assam is witnessing a fast religious demographic change and it needs to be controlled.

Himanta Biswa Sarma is famous for his false Statements, In 2004 , Sarma called Modi a “terrorist” and said the blood of Muslims flows through the water pipes in Gujarat. 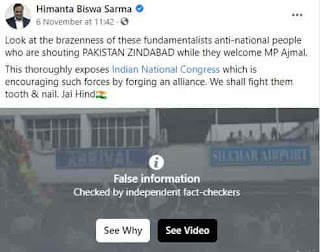 Some of the crowded party workers also shouted Ajmal bhai zindabad and AIUDF zindabad to show support to Badruddin Ajmal and the party. None of the videos had the 'Pakistan Zindabad' slogans being raised.

The event is from November 5 when Badruddin Ajmal, chief of All India United Democratic Front, reached Silchar airport for a four-day visit in Bakar valley with other party members including Karimganj MLA Aziz Khan and was welcomed by supporters.

Aziz Ahmed Khan is an AIUDF Member of Legislative assembly (MLA) from Karimganj South Vidhan Sabha constituency in Assam which is the reason for 'Aziz bhai zindabad' and Aziz Khan zindabad' slogans being raised. The other slogans of Ajmal bhai zindabad and AIUDF zindabad were raised for Ajmal and the party.

We found a Facebook video uploaded by a supporter and found the same event shot from a different angle where after the 55-second mark; one can hear various sections of the crowd shouting three slogans - 'Aziz

Who will believe B grade actress Kangana? Mumbai Police will ask Kangana about Sushant Singh's death.

How to start a blog easy and simple steps

HOW TO BECOME AN IPS OFFICER