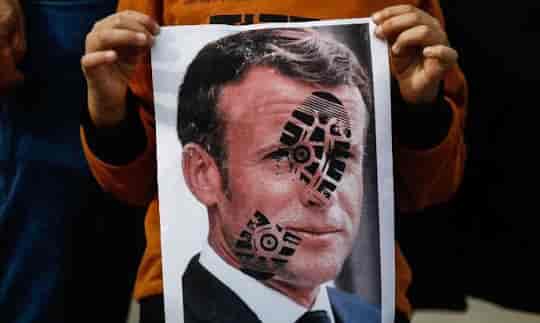 Anger spreads in world after Macron's backing for Muhammad cartoons

Pakistan also criticized France on Sunday, with the prime minister, Imran Khan, accusing Macron of “attacking Islam” by encouraging the publication of caricatures of Muhammad.

Masood Khan, the president of Pakistan-administered Azad Kashmir, tweeted: “President Macron has ignobly earned a patent for #Islamophobia and incitement to hatred against Muslims. We condemn his blasphemous words and the mindset behind them. France suffered from such a mindset during WWII. Why does he inflict similar injury on others?”

A protester in Istanbul holds a picture of Emmanuel Macron, which has been defaced with a shoe print

A protester in Istanbul holds a picture of Emmanuel Macron, which has been defaced with a shoe print Photograph:

France has appealed for foreign governments to stamp out calls by what it calls a “radical minority” for a boycott of French products after Emmanuel Macron’s public backing of the Muhammad caricatures.

The appeal came as anger escalated across the Islamic world over the president’s remarks at a national tribute to the murdered high-school teacher Samuel Paty last week, with Turkish leader, Recep Tayyip Erdoğan, calling on Monday for a complete boycott of French products in Turkey.

Paty, 47, was killed after he showed his class drawings of the prophet during a debate on free speech.

After Macron promised France would not “renounce the caricatures”, a furious riposte that emerged on Friday on social media under Arabic hashtags gained momentum over the weekend.

In a strongly worded statement, France’s foreign ministry demanded that calls for a boycott of its products and the “occasionally hateful” protests against the country must end.

“These calls distort the positions defended by France in favor of freedom of conscience, freedom of expression, freedom of religion and the refusal of any call to hatred,” it read.

“Consequently, the calls for boycott are pointless and must cease immediately, as must all attacks against our country, instrumental zed by a radical minority.”

The statement added: “The ministers and our entire diplomatic network are fully mobilized to remind and explain to our partners France’s positions, particularly with regard to fundamental freedoms and the rejection of hatred, to call on the authorities of the countries concerned to dissociate themselves from any call for a boycott or any attack against our country, to support our companies and to ensure the safety of our compatriots abroad.”

On Sunday, after protests in which the president’s picture was burned and Erdoğan suggested his French counterpart needed “his mental health tested”, Macron also responded.

“Our history is one of battles against tyranny and fanaticism. We will continue,” Macron tweeted in three languages, French, English and Arabic.

“We respect all differences in a spirit of peace. We will never accept hate speech and we defend reasonable debate. We will continue. We hold ourselves always on the side of human dignity and universal values,” the French president added.

Turkey, Iran, Jordan and Kuwait are among Islamic countries to criticize the publication of the caricatures, which originally appeared in France in Charlie Hebdo, sparking a terrorist attack on the satirical newspaper in 2015 that killed 12 people.

While condemning “all acts of terror in the name of religion” it attacked the “continued publication of blasphemous cartoons” of the prophet.

Muslims have also been angered by Macron’s comments earlier this month that Islam is “a religion that is in crisis all over the world today”. The comments were made when the French president announced his long-awaited law against “separatism” aimed at combatting radical Islam in France, expected to be presented to the French parliament in December. The influential university-mosque, al-Azhar in Cairo, Egypt, described Macron’s statement as “racist”.

In Qatar, certain food distribution groups announced they were removing French products from their shops for the foreseeable future. Meanwhile, French cultural week planned at the Qatar University has been postponed because of a “deliberate attack on Islam and its symbols”.

In Kuwait, French cheeses – La Vache Qui Rit and Babybel – have been removed from some stores. About 430 Kuwaiti travel agents have reportedly suspended reservations for flights to France.

After Erdoğan criticized Macron directly, saying “Go and get your mental health tested”, Paris recalled its ambassador to Ankara and responded that the comment was “unacceptable”. It accused Turkey of “whipping up hatred” against France.

As the backlash over France’s reaction widened, European leaders rallied behind Macron. “They are defamatory comments that are completely unacceptable, particularly against the backdrop of the horrific murder of the French teacher Samuel Paty by an Islamist fanatic,” German Chancellor Angela Merkel‘s spokesman Steffen Seibert said.

The prime ministers of Italy, the Netherlands and Greece also expressed support for France, as did European Commission president Ursula von der Leyen.

On Monday, Erdogan called for a complete boycott of French products in Turkey, saying: “Never give credit to French-labelled goods, don’t buy them.” he also compared the treatment of Muslims in Europe to that of Jews before World War II, saying they were the object of a “lynching campaign.”

In Israel, about 200 people gathered in front of the French embassy to condemn Macron. In Gaza, Palestinian protesters burned photos of the French president.

Police shot Abdullah Anzorov, 18, after he allegedly beheaded Paty 10 days ago. Investigators say the suspect had communicated with two people from an Islamist group in Syria but add there is no evidence the attack was ordered from abroad.

Police believe the Russian-born Chechen, who lived in Évreux, Normandy, became radicalised of his own accord but is looking into a sports club and two mosques he frequented in recent months.

France’s anti-terrorism prosecutor confirmed on Thursday that seven people, including two pupils at Paty’s school in Conflans-Sainte-Honorine, had been charged with terrorism offences.

Paty was posthumously awarded the Légion d’honneur, France’s highest honour, at a ceremony at Sorbonne University in Paris on Wednesday. Macron said France owed it to a “quiet hero … to continue his fight for liberty and for reason”.

Paty showed the class the images of Muhammad alongside other caricatures and cartoons of different subjects as part of a discussion on free speech, after inviting any pupils who might be offended to look away.

Pakistanis on Monday joined the campaign to boycott French products in response to recent controversial comments made by President Emmanuel Macron on Islam, and his decision to continue publishing blasphemous cartoons of the Prophet Muhammad.

While the hashtag, #boycottfrenchproducts, was among the top trends on Twitter in Pakistan, leaders and scholars urged the citizens to stop consuming French products.

"After insults against the Holy Prophet by France and its president, will we still continue buying and selling, and import of French products? They will only learn a lesson when Muslims around the world will boycott their products...," religious scholar Muhammad Taqi Usmani tweeted.

just when we need it the most. Millions of readers around the world are flocking to the Guardian in search of honest, authoritative, fact-based reporting that can help them understand the biggest challenge we have faced in our lifetime. But at this crucial moment, news organizations are facing a cruel financial double blow: with fewer people able to leave their homes, and fewer news vendors in operation, we’re seeing a reduction in newspaper sales across the UK. Advertising revenue continues to fall steeply meanwhile as businesses feel the pinch. We need you to help fill the gap.

We believe every one of us deserves equal access to vital public service journalism. So, unlike many others, we made a different choice: to keep Guardian journalism open for all, regardless of where they live or what they can afford to pay. This would not be possible without financial contributions from those who can afford to pay, who now support our work from 180 countries around the world.

Reader financial support has meant we can keep investigating, disentangling and interrogating. It has protected our independence, which has never been so critical. We are so grateful.

“The current trend of boycott of French products and anti-Macron protests around the Muslim world shows people's anger, and how much they are hurt by the French president’s statement,” Sirajul Haq, the chief of Jamaat-e-Islamic, a leading religio-political party, told Anadolu Agency.

Calls for a boycott of French products have been made in many Middle Eastern countries as well.

Pakistan's Prime Imran Khan, and other opposition politicians have condemned the French president for "attacking Islam."

The country's Ministry of Foreign Affairs summoned the French ambassador to convey "deep concerns" over the recent "illegal and Islamophobic acts," and condemned equating Islam with terrorism.

Khan also wrote to Mark Zuckerberg, CEO of Facebook, asking him to put a ban on Islamophobic content.

Haq, meanwhile, called for expulsion of the French envoy in Pakistan.

Earlier this month, Macron described Islam as a religion "in crisis," and announced plans for tougher laws to tackle what he called "Islamist separatism" in France.

He also paid tribute to a French teacher murdered after he showed cartoons of the Prophet Muhammad in class.

Prophet is my Pride

Prophet is my Proud

Prophet is my Leader

Prophet is my identity.

Prophet is my guide.

People are posting about this

#ShameOnYouMacroIf we still don't boycott the products of France then we should not call ourselves Muslims... We need to show them the power of Muslims. Unite and boycott France

TaHir Rasheed Buzdar is with Abuzar Hameed and .

In France, the glory of the Prophet Muhammad (peace be upon him) was again insulted...

Why are they playing with the emotions of Muslims?

Now is the time for all Muslims to campaign together against this blasphemous image….

My name is Dr Saira Jasmine .And I am Muslim And pakistani ❤

Its my Appeal to all Muslims to

#BYCOTTFranceProducts Because they did blasphemy of our Beloved Prophet  Hazrat Muhammad S.A.W❤..… See more

Diplomatic relations with France should be conditionally suspended. If Muslims didn’t respond now. Than there will be such more state backed incidents in other islamophobic countries. So make France an example for others.