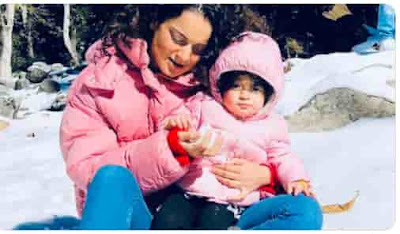 Kangana Ranaut was born on 23 March 1987 at Bhambla (now Surajpur), a small town in the Mandi district of Himachal Pradesh, into a Rajput family.

Her mother, Asha Ranaut, is a school teacher, and her father, Amardeep Ranaut, is a businessman. She has an elder sister, Rangoli Chandel, who as of 2014 works as her manager and a younger brother, Akshat.

Her great-grandfather, Sarju Singh Ranaut, was a Member of the Legislative Assembly and her grandfather was an officer for the Indian Administrative Service.

She grew up in a joint family at their ancestral haveli (mansion) in Bhambla, and described her childhood as "simple and happy".

According to Ranaut, she was "stubborn and rebellious" while growing up: "If my father would give my brother a plastic gun and get a doll for me, I would not accept that.

I questioned the discrimination." She did not subscribe to the stereotypes that were expected of her and experimented with fashion from a young age, often pairing up accessories and clothes that would seem "bizarre" to her neighbors.

Ranaut was educated at the DAV School in Chandigarh, where she pursued science as her core subject, remarking that she was "very studious" and "always paranoid about results". She initially intended to become a doctor on the insistence of her parents.

However, a failed unit test in chemistry during her twelfth grade led Ranaut to reconsider her career prospects and despite preparing for the All India Pre Medical Test, she did not turn up for the exam. Determined to find her "space and freedom", she relocated to Delhi at the age of sixteen.

Her decision not to pursue medicine led to constant feuding with her parents and her father refused to sponsor a pursuit he considered to be aimless.

In Delhi, Ranaut was unsure which career to choose; the Elite Modeling Agency were impressed by her looks and suggested that she model for them.

She took on a few modeling assignments, but generally disliked the career as she found "no scope for creativity". Ranaut decided to shift focus towards acting and joined the Asmita Theatre Group, where she trained under the theatre director Arvind Gaur. She participated in Gaur's theatre workshop at the India

Ranaut struggled with her meager earnings during this period, eating only "bread and aachar (pickle)". Refusing her father's financial assistance led to a rift in their relationship which she later regretted.

Her relatives were unhappy with her decision to enter the film-making industry, and they did not correspond with her for several years. She reconciled with them after the release of Life in a... Metro in

Kangana Ranaut is smiling away from the camera

In 2004, the producers Ramesh Sharma and Pahlaj Nilani announced that Ranaut would make her film debut with the Deepak Shivdasani-directed I Love You Boss.

The following year, an agent took her to the office of the producer Mahesh Bhatt, where she interacted with the director Anurag Basu and auditioned for the lead role in the romantic thriller Gangster.

The supernatural horror film Raaz: The Mystery Continues from director Mohit Suri was Ranaut's first film release of 2009, in which she played a successful model who is possessed by a ghost.

The film co-starred Emraan Hashmi and Adhyayan Suman and proved to be a financial success. Shubhra Gupta of The Indian Express noted that Ranaut was becoming stereotyped in roles that required her to be "hysterical", adding that she needed a "radical change of image".

In a brief role in Anurag Basu's romantic thriller Kites (2010), Ranaut portrayed the fiancée of Hrithik Roshan's character. She said that she felt "cheated" after watching the film, as her role proved to be much smaller than what she had initially signed on for.

She then portrayed fictional film actress Rehana in the Milan Luthria-directed gangster film Once Upon a Time in Mumbaai. Also starring Ajay Devgn, Emraan Hashmi and Prachi Desai, the film chronicles the rise and subsequent fall of an underworld don (played by Devgn) in the 1970s.

Ranaut said that her character was "a mix" of the actress Madhubala and the gangster Haji Mastan's wife and that to prepare she observed the work of the actresses Zeenat Aman and Parveen Babi.

The film was one of the most successful releases of the year and garnered positive reviews from critics. Sudish Kamath of The Hindu labelled her a "delight" and Mid Day's Sarita Tanwar praised her for being "totally convincing" in the role.

According to Bollywood Hungama, after establishing a reputation for portraying neurotic characters, Ranaut was seeking projects that would be "less emotionally exhausting" for her.

Her first release of 2011 was Anand L. Rai's Tanu Weds Manu, a romantic comedy opposite R. Madhavan, which Ranaut considers a "game changer" for her.

Rai stated that he cast her for the role to illustrate that the actress was capable of playing other roles and that her character in the film was unlike any of those that she had played previously.

Critical reaction to the film was mixed, though Ranaut's performance was praised.

Ranaut followed the success of Tanu Weds Manu by starring in a series of brief, glamorous roles in four other films of 2011: Game, Double Dhamaal, Rascals and Miley Naa Miley Hum. With the exception of Double Dhamaal, none of these films performed well.

The director Sanjay Gupta cast Ranaut in a brief role opposite John Abraham in the crime thriller Shootout at Wadala (2013) due to her ability to stand out in a predominantly male-centric film.

The Daily News and Analysis' Tushar Joshi wrote that her role was written "to provide the sex quotient" and critic Vinayak Chakravorty opined that she "does not get much scope  beyond the steamy lovemaking grind" Commercially, the film performed moderately well.

She made her production and directorial debut with an English language short film entitled The Touch, dealing with the relationship between a four-year-old boy and a dog; she co-wrote the screenplay with an Australian writer and filmed it in America.

Also in 2015, Ranaut appeared in the romantic comedies I Love NY  and Nikhil Advani's Katti Batti, both of which failed at the box office. The latter saw her play opposite Imran Khan as a cancer patient, a role that critic Uday Bhatia of Mint thought "lack the sort of definition she's had in her last few roles"

After a year-long absence from the screen, Ranaut starred as Julia, a 1940s heroine and stunt-woman in Vishal Bhardwaj's romance Rangoon (2017), opposite Saif Ali Khan and Shahid Kapoor.

Modelled on the actress Fearless Nadia, Ranaut played the part as an "amalgamation of many characters" from that era, and was particularly drawn towards the "fierceness and sensuality" she found in her.

Ranaut has stated that her initial years in the film industry were marred with difficulties as she was unprepared to be an actress.

She was conscious of her poor command of the English language and struggled to "fit in" In a 2013 interview with Daily News and Analysis, Ranaut recollected:

"People in the industry treated me like I didn't deserve to be spoken to and I was some unwanted object. I couldn't speak English fluently and people made fun of me for that.

So dealing with rejection became a part of life. All that has taken a toll, I guess. I find it hard to deal with praise.

During the struggle, Ranaut found support in the actor Aditya Pancholi and his wife Zarina Wahab and considered them her "family away from home". She became embroiled in a well publicised scandal when the media speculated on the nature of her relationship with Pancholi.

She declined to speak about it openly, although she made several public appearances with him. In 2007 it was reported that Ranaut had filed a police complaint against Pancholi for physically assaulting her under the influence of alcohol.

While filming Raaz: The Mystery Continues in 2008, Ranaut began a romantic relationship with co-star Adhyayan Suman. On Suman's insistence that he focus on his professional career, the couple separated the following year.

From 2010 to 2012, Ranaut was involved in a long-distance romance with Nicholas Lafferty, an English doctor; she described the relationship as "the most normal" she ever had, but the couple split amicably as she was not ready for marriage.

Ranaut at the Signature International Fashion Weekend in 2013. In the book Acting Smart: Your Ticket to Showbiz, Tisca Chopra describes Ranaut as a "free-spirited, original creative" person "who cannot really be slotted in a particular mould"

Ranaut is particularly known for her forthrightness in expressing her opinions in public on issues ranging from film to feminism.

Ranaut has been the recipient of three National Film Awards: Best Supporting Actress for Fashion (2008) and Best Actress for Queen (2014) and Tanu Weds Manu Returns (2015).

In 2020, Ranaut was awarded the Padma Shri, the fourth highest civilian award, by the Government of India, for her contribution to arts.